skip to main | skip to sidebar

Surprisingly little is known of many species of large waterbirds such as storks, ibis and spoonbills. The Lesser Adjutant is one such species. Until recently, it was thought to require tall trees in forests to nests. However, surveys in the lowlands of eastern and central Nepal during 2013-15 have found that practically all of the nesting in some of the rice-growing districts are on trees amid fields. Clearly, a lot is needed to be done in the field to understand this species better. Here is my bit.

With my colleagues, I observed Lesser Adjutants for many an hour in central lowland Nepal in the districts of Rupandehi and Kapilvastu. I restrict this blog post to some of the observations we had of the species feeding in the rice paddies.

As has been seen in eastern Nepal, and in Sri Lanka, Lesser Adjutants in Nepal frequent rice paddies during the monsoon. They steer clear of traffic on the roads, and keep at least 20-30 feet from farmers working on the fields. 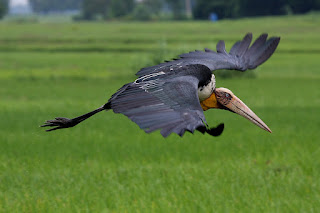 One morning, we observed three stork feeding together - all three were exceedingly successful in finding earthworms in the flooded rice fields! We watched as each of them found and devoured 5-7 earthworms in just five minutes! The photo below shows one earthworm meeting its end between the massive beak of a Lesser Adjutant. 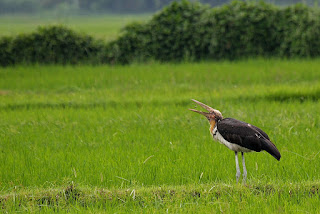 Another individual seemed an expert at finding insects in the rice fields. In the photo below, a Belastomatid (giant water bug) is swallowed with gusto. 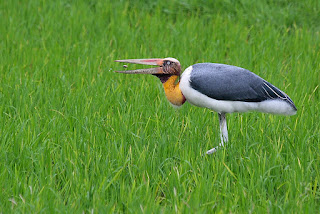 Another individual, shown below, caught and devoured a freshwater crab that seemed too tiny to be of consequence, but clearly kept the stork's attention as it maneuvered the animal into its mouth. 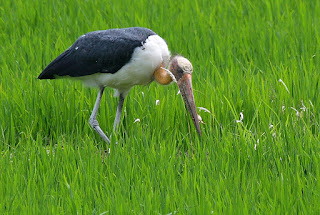 With almost no time wasted the same stork also caught a fish, which nearly escaped. But,down the hatch it went! 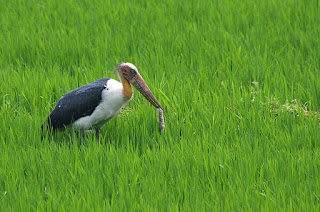 Other colleagues and students have seen Lesser Adjutants in Nepal bring snakes to feed chicks at nests. Now, that must have been a treat for all!

(All photos from Rupandehi and Kapilvastu districts in lowland Nepal, Aug 2014.)
Posted by Gopi Sundar at 8:34 AM

Gopi Sundar
I started this blog to primarily share photographs taken during my PhD field work (2008-2010). I have since expanded this to include observations made during my travels to areas with Sarus, and also other crane species. The idea is to showcase the landscapes that cranes live in, to understand that that the homes of only 15 species can have incredible diversity of life and human habits, and to help achieve a better appreciation for areas dominated by humans and human activity.