skip to main | skip to sidebar

Bill Fencing is one such phrase used for a behaviour that many storks exhibit. As the name suggests, they fence with their bills!

Fencing can start pretty small - appearing to be a friendly, even affectionate, touching and clicking of bills. Like the two Painted Storks below. 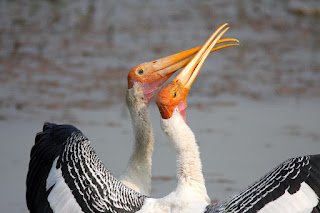 Quickly, it can escalate to an obvious joust that is not so friendly! 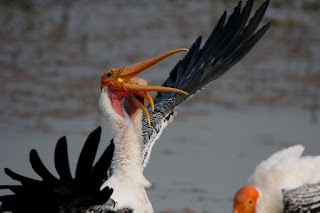 The point of bill fencing appears to be to grab hold of the beak of the opposition. 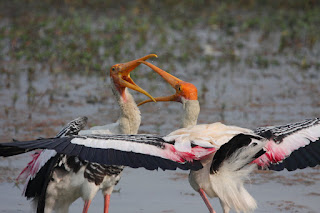 And then, if food or a prized foraging patch is involved, it can escalate to a full-on fight! Use of wings, beaks and even legs seem fair game. A stork below appears to be karate-chopping the other lunging stork! 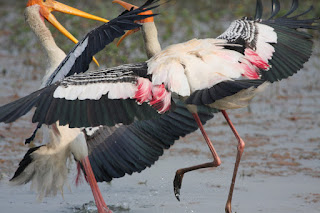 Until the beak of the opponent is finally in hand. Or rather, in bill! 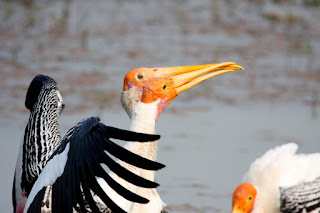 Then, the "vanquished" opponent either walks away, or, if feeling particularly adventurous, tries to disengage, and another bout of bill fencing ensues until the beak is in hand (or bill) again. 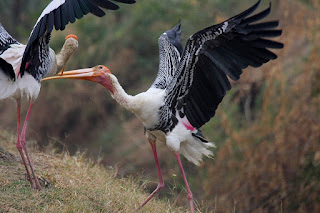 One bird, clearly tired of the forced bill-shutting (and perhaps finally alarmed at the dangerous jabs of the long bill so close to the face!), eventually flies away. And the winner, after some work, keeps the spoils!! 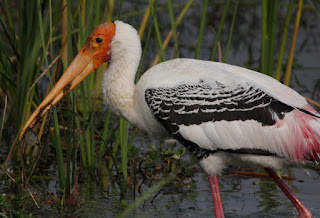 Better this I say than jabs to the body, bleeding wings, and gouged eyes. Maybe these happen too...

(All photos taken in 2015 from various locations in western Uttar Pradesh.)
Posted by Gopi Sundar at 6:39 PM

Gopi Sundar
I started this blog to primarily share photographs taken during my PhD field work (2008-2010). I have since expanded this to include observations made during my travels to areas with Sarus, and also other crane species. The idea is to showcase the landscapes that cranes live in, to understand that that the homes of only 15 species can have incredible diversity of life and human habits, and to help achieve a better appreciation for areas dominated by humans and human activity.